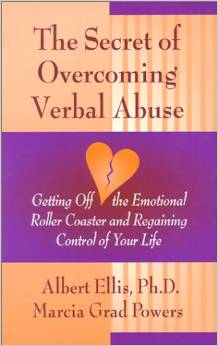 The Secret of Overcoming Verbal Abuse: Getting Off the Emotional Roller Coaster and Regaining Control of Your Life Albert Ellis and Marcia Grad Powers (Wilshire Book Company, 2000)Order

This book was witten in response to requests by the coauthors’ clients, students, and readers of their boks for an effective, practical ways to reduce their pain, face their fears and heal themselves and their lives-whether they stay or leave their verbally abusive relationship. Alberat Ellis, Ph.D. is coauthor of Guide to Rational Living, and is a renowned psychologist and originator of modern Cognitive Therapy and Rational, Emotive, Behavior Therapy (REBT), author of numerous books and professional articles, and director of the Albert Ellis Institute in New York. Coauthor, Marcia Grad Powers, is an accredited REBT educator, credentialled teacher, university psychology and personal growth lecturer, popular author. This book will make a major difference in the lives of countless women who deal every day with one of the most disturbing and challenging societal issues of our time. 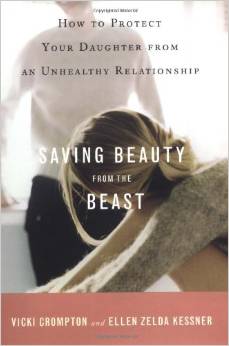 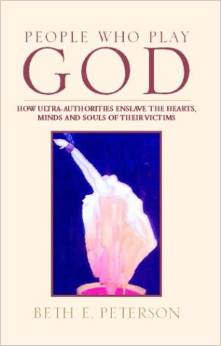 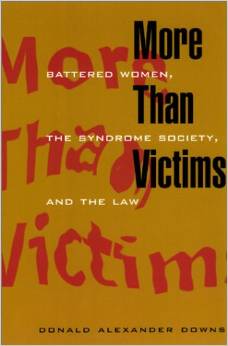 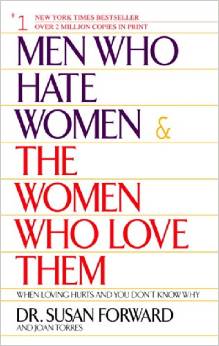 Men Who Hate Women and the Women Who Love Them: When Loving Hurts and You Don’t Know Susan Forward (Bantam January 2, 2002)Order

Forward is a therapist, author, and talk-show host whose specialty is abusive relationships. This book grew out of her realization that her own marriage as well as those of many of her clients followed a pattern. Many men need to control their relationships completely and consequently are mentally (if not physically) abusive. They denigrate their partners, resent them if they have any outside interests, and become furious for trivial reasons. Women with low self-esteem are drawn to these men because they can also be charming and devoted. Forward devotes the first half of the book to an analysis of the problem, the second half to breaking the pattern and getting outside help. No bibliography, but competent and interesting, and sure to be popular. Recommended for public libraries. Margaret B. Allen, M.L.S., West Lebanon, 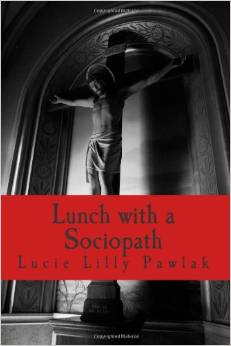 This is not the kind of book anyone would enjoy, but it isn’t meant to be. However, Ms. Pawlak is a fantastic writer who is amazingly able to put very difficult feelings and thoughts into words. She is incredibly candid. I read this book in three days because I couldn’t put it down. When I wasn’t reading it, I was thinking about it. I lost sleep over it. This book’s intended purpose is to help those people who are suffering or have suffered spiritual abuse and will fulfill it very well. I also believe that it will help the friends and loved ones of these victims, not because it can tell them how to help, but because it will allow them to see inside the mind and soul of someone who is enduring this kind of trauma and will help them to understand what is happening–it did for me. At some point, if she is able, Ms. Pawlak should look for more opportunities to raise awareness of this problem. 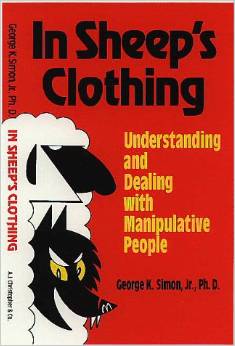 George K. Simon, Jr. received his Ph.D. in clinical psychology from Texas Tech University. He has studied manipulators and their victims for over 10 years and given numerous workshops and seminars on covert- aggressive personalities. Dr. Simon consults to various agencies and institutions and maintains a private practice.

If you feel unfairly criticized, controlled by others, or are afraid of being lonely, you could be suffering from emotional abuse. Now there is help in this compassionate sourcebook. Bevery Engel, a marriage, family, and child therapist, guides you through a step-by-step recovery process to help you heal the damage done in the past.

Clinical psychologist and business consultant Albert Bernstein’s Emotional Vampires: Dealing with People Who Drain You Dry is a humorous yet serious look at our interactions with people who seem to sap our energy. Through anecdotes, Bernstein makes the various categories of vampires distinctive and recognizable (Anti-Social, Histrionic, Narcissistic, Obssessive-Compulsive and Paranoid) and offers practical guidance for how readers can deal with them effectively (Understanding Emotional Vampires’ immaturity is your ultimate weapon). 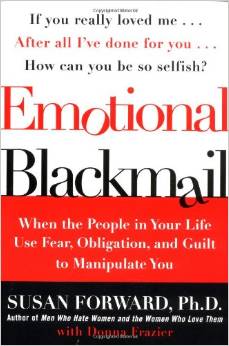 Emotional Blackmail: When the People in Your Life Use Fear, Obligation and Guilt to Manipulate You Susan Forward & Donna FrazierOrder

Forward, who gave us the best-selling The Men Who Hate Women, and the Women Who Love Them, offers a course on self-defense for anyone manipulated by guilt.